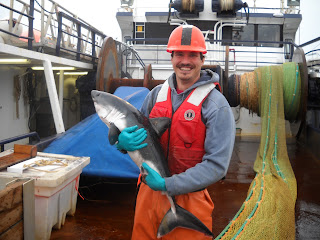 Welcome to the third research leg of GOAIERP, aboard the F/V Northwest Explorer. We have successfully sampled the both Kayak Island and Yakutat line, and are now working the offshore grid of the Southeast Alaska. Although we are enjoying some nice weather right now we did have one storm blow through as we working off of Yakutat. At one point we had 15+ft seas and winds gusting over 50 knots. After completing 3 of the 4 stations we called it quits and anchored up in front of Yakutat. This offered up a nice opportunity for both the crew and scientist to get ashore and stretch their legs in and do some sightseeing in the remote town of Yakutat. After waiting a day for things to calm down we went back out and finished our last station before heading back down towards Cross Sound. So far compared to the spring and summer sampling, our catches have been light, especially offshore. We have, however, managed, to collect some of our focal fish including rockfish, pollock and even of a couple of the elusive sablefish. Another interesting thing is that we have been catching a variety of sharks. Off the coast of Kayak Island we caught two blue sharks, while off of Yakutat we caught a few spiny dogfish and most recently in Southeast we caught two salmon sharks. One of these Salmon sharks was just a small pup, only measuring 85.5 cm (2.8ft) and weighing 10.2kg(22.5lbs). I asked if we could keep him as a pet but alas we let him go in hopes that he grows up big and happy.

More than 600 peer-reviewed publications have been produced through NPRB-funded research. Browse our library and our reports here.

NPRB comprises a 20 member Board, representing Federal, State, and other entitites while receiving advice from Science and Advisory Panels.

Looking to partner with NPRB? NPRB welcomes partnerships to co-fund research in areas of common interest and across its programs.

NPRB communicates and engages with a broad and diverse set of Alaskan stakeholders and audiences, from coastal communities to academia.

NPRB staff begins developing draft research priorities for the Core Program in late July and August. Submit before July 2nd to be considered for the current year’s RFP development.

The Arctic Integrated Ecosystem Reserach Program looked at how physical changes in the ocean influence the flow of energy through the marine food web in the Bering Strait, Chukchi Sea, and western Beaufort Sea from 2017-2021.

Supporting science communication, engagement, outreach, and education initiatives for all our research programs.

This program supports new or existing time-series research that enhance the ability to understand the current state of marine ecosystems.

The Bering Sea Project, a partnership between the North Pacific Research Board and the National Science Foundation, sought to understand the impacts of climate change and dynamic sea ice cover on the eastern Bering Sea ecosystem.

NPRB supports next generation scientists, researchers, and resource managers to further their studies in relevant fields of marine science and to our mission.

We use cookies on our website to give you the most relevant experience by remembering your preferences and repeat visits. By clicking “Accept”, you consent to the use of ALL the cookies.
Do not sell my personal information.
Cookie SettingsAccept
Manage consent

This website uses cookies to improve your experience while you navigate through the website. Out of these, the cookies that are categorized as necessary are stored on your browser as they are essential for the working of basic functionalities of the website. We also use third-party cookies that help us analyze and understand how you use this website. These cookies will be stored in your browser only with your consent. You also have the option to opt-out of these cookies. But opting out of some of these cookies may affect your browsing experience.
Necessary Always Enabled
Necessary cookies are absolutely essential for the website to function properly. These cookies ensure basic functionalities and security features of the website, anonymously.
Functional
Functional cookies help to perform certain functionalities like sharing the content of the website on social media platforms, collect feedbacks, and other third-party features.
Performance
Performance cookies are used to understand and analyze the key performance indexes of the website which helps in delivering a better user experience for the visitors.
Analytics
Analytical cookies are used to understand how visitors interact with the website. These cookies help provide information on metrics the number of visitors, bounce rate, traffic source, etc.
Advertisement
Advertisement cookies are used to provide visitors with relevant ads and marketing campaigns. These cookies track visitors across websites and collect information to provide customized ads.
Others
Other uncategorized cookies are those that are being analyzed and have not been classified into a category as yet.
SAVE & ACCEPT