by Wyatt Fournier
When I asked Marty, our seabird and marine mammal observer from US Fish and Wildlife, what the highlights of his trip were he listed off numerous species of birds.  A Red Legged Kitty Wake, usually sighted in the Bering Sea, took a ride on our bow for a while. A South Polar Skua flew by perhaps at the end of a long journey from the Antarctic.  Marty even helped rescue a Storm Petrel that had crashed landed on the NW Explorer and he built a bird feeder out of a pink pen and a plastic pipette filled with sugar water for a lost humming bird. 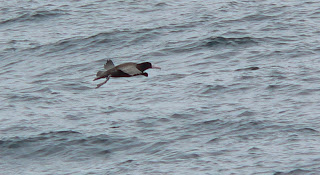 But the rarest sighting was the endangered Short Tail Albatross.  This large rare seabird came perilously close to extinction when they were hunted for their feathers in the late 19th century. By the 1930s the only population left was on Tori-shima, which is listed as a class A volcano.  By 1949 the species was thought to be extinct but an estimated 50 individuals returned to the island and the first egg was observed in 1954.
The picture Marty was able to get is of a juvenile, it is still recognized by the brightly colored bill.
Read about US Fish and Wildlife’s efforts to protect this amazing bird:
http://alaska.fws.gov/fisheries/endangered/pdf/STALfactsheet.pdf
and to Encounters North public radio segment on the albatross http://encountersnorth.org/audio_files/Encounters_Albatross.mp3

More than 600 peer-reviewed publications have been produced through NPRB-funded research. Browse our library and our reports here.

NPRB comprises a 20 member Board, representing Federal, State, and other entitites while receiving advice from Science and Advisory Panels.

Looking to partner with NPRB? NPRB welcomes partnerships to co-fund research in areas of common interest and across its programs.

NPRB communicates and engages with a broad and diverse set of Alaskan stakeholders and audiences, from coastal communities to academia.

NPRB staff begins developing draft research priorities for the Core Program in late July and August. Submit before July 2nd to be considered for the current year’s RFP development.

The Arctic Integrated Ecosystem Reserach Program looked at how physical changes in the ocean influence the flow of energy through the marine food web in the Bering Strait, Chukchi Sea, and western Beaufort Sea from 2017-2021.

Supporting science communication, engagement, outreach, and education initiatives for all our research programs.

This program supports new or existing time-series research that enhance the ability to understand the current state of marine ecosystems.

The Bering Sea Project, a partnership between the North Pacific Research Board and the National Science Foundation, sought to understand the impacts of climate change and dynamic sea ice cover on the eastern Bering Sea ecosystem.

NPRB supports next generation scientists, researchers, and resource managers to further their studies in relevant fields of marine science and to our mission.